Architectural singularities of a class of pentapods 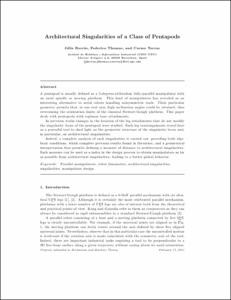 Except where otherwise noted, content on this work is licensed under a Creative Commons license : Attribution-NonCommercial-NoDerivs 3.0 Spain
Abstract
A pentapod is usually defined as a 5-degrees-of-freedom fully-parallel manipulator with an axial spindle as moving platform. This kind of manipulators has revealed as an interesting alternative to serial robots handling axisymmetric tools. Their particular geometry permits that, in one tool axis, high inclination angles could be attained, thus overcoming the orientation limits of the classical Stewart-Gough platform. This paper deals with pentapods with coplanar base attachments. In previous works changes in the location of the leg attachments that do not modify the singularity locus of the pentapod were studied. Such leg rearrangements reveal here as a powerful tool to shed light on the geometric structure of the singularity locus and, in particular, on architectural singularities. Indeed, a complete analysis of such singularities is carried out, providing both algebraic conditions, which complete previous results found in literature, and a geometrical interpretation that permits defining a measure of distance to architectural singularities. Such measure can be used as a index in the design process to obtain manipulators as far as possible from architectural singularities, leading to a better global behavior.
CitationBorras, J.; Thomas, F.; Torras, Carme. Architectural singularities of a class of pentapods. "Mechanism and machine theory", 2011, vol. 46, núm. 8, p. 1107-1120.
URIhttp://hdl.handle.net/2117/14439
ISSN0094-114X
Publisher versionhttp://dx.doi.org/10.1016/j.mechmachtheory.2011.03.005
Collections
Share: