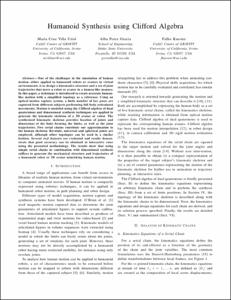 Kuester, Falco
Document typeConference report
PublisherIEEE
Rights accessOpen Access
Abstract
One of the challenges in the simulation of human motion, either applied to humanoid robots or avatars in virtual environments, is to design a kinematics structure and a set of joint trajectories that move a robot or avatar in a human-like manner. In this paper, a technique is introduced to create accurate humanlike motion with a simplified topology as a reference. Using an optical motion capture system, a finite number of key poses are captured from different subjects performing full body articulated movements. Motion is modeled using the Clifford algebra of dual quaternions and dimensional synthesis techniques are applied to generate the kinematic skeleton of a 3D avatar or robot. The synthesized kinematic skeleton provides location of joints and dimensions of the links forming the limbs, as well as the joint trajectories. Five serial chains constitute our approximation to the human skeleton. Revolute, universal and spherical joints are employed, although other topologies can be used in a similar fashion. Several real datasets are evaluated and results demonstrate that good accuracy can be obtained at interactive rates using the presented methodology. The results show that using simple serial chains in combination with dimensional synthesis suffices to generate the mechanical structure and trajectories of a humanoid robot or 3D avatar mimicking human motion.
CitationVilla-Uriol, M.C.; Perez-Gracia, A.; Kuester, F. Humanoid synthesis using clifford algebra. A: IEEE International Conference on Robotics and Automation. "Proceedings of the 2006 IEEE International Conference on Robotics and Automation". Orlando, Florida: IEEE, 2006, p. 107-112.
URIhttp://hdl.handle.net/2117/14437
ISBN0-7803-9505-0/06
Collections
Share: