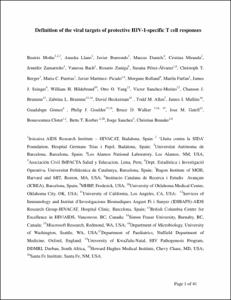 Heckerman, David
Allen, Todd M.
Document typeArticle
Rights accessOpen Access
Abstract
Background: The efficacy of the CTL component of a future HIV-1 vaccine will depend on the induction of responses with the most potent antiviral activity and broad HLA class I restriction. However, current HIV vaccine designs are largely based on viral sequence alignments only, not incorporating experimental data on T cell function and specificity. Methods: Here, 950 untreated HIV-1 clade B or -C infected individuals were tested for responses to sets of 410 overlapping peptides (OLP) spanning the entire HIV-1 proteome. For each OLP, a “protective ratio” (PR) was calculated as the ratio of median viral loads (VL) between OLP nonresponders and responders. Results: For both clades, there was a negative relationship between the PR and the entropy of the OLP sequence. There was also a significant additive effect of multiple responses to beneficial OLP. Responses to beneficial OLP were of significantly higher functional avidity than responses to non-beneficial OLP. They also had superior in-vitro antiviral activities and, importantly, were at least as predictive of individuals’ viral loads than their HLA class I genotypes. Conclusions: The data thus identify immunogen sequence candidates for HIV and provide an approach for T cell immunogen design applicable to other viral infections.
CitationMothe, B. [et al.]. Definition of the viral targets of protective HIV-1-specific T cell responses. "Journal of translational medicine", 07 Desembre 2011, vol. 9, núm. 208, p. 1-48.
URIhttp://hdl.handle.net/2117/14410
DOI10.1186/1479-5876-9-208
ISSN1479-5876
Publisher versionhttp://www.translational-medicine.com/content/pdf/1479-5876-9-208.pdf
Collections
Share: