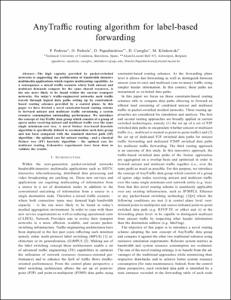 Klinkowski, Miroslaw
Document typeExternal research report
Rights accessOpen Access
Abstract
The high capacity provided by packet-switched networks is supporting the proliferation of bandwidth intensive multimedia applications which require multicasting capability. As a consequence a mixed traffic scenario where both unicast and multicast demands compete for the same shared resources, is the one more likely to be found within the current transport networks. On today’s traffic-engineered networks such traffic travels through logical data paths setting up by constrained-based routing schemes provided by a control plane. In this paper we have devised a novel constraint-based routing scheme to forward unicast and multicast traffic envisioning a system resource consumption outstanding performance. We introduce the concept of AnyTraffic data group which consists of a group of egress nodes receiving unicast and multicast traffic over the same single minimum-cost tree. A novel Steiner tree-based heuristic algorithm is specifically defined to accommodate such data group and has been compared with the standard shortest path (SP) algorithm - the optimal case for unicast routing - and a classical Steiner tree (ST) heuristic algorithm - the optimal case for multicast routing. Exhaustive experiments have been done to validate the results.
CitationPedroso, P. [et al.]. "AnyTraffic routing algorithm for label-based forwarding". 2009.
Is part ofUPC-DAC-RR-2009-43
URIhttp://hdl.handle.net/2117/14381
URL other repositoryhttp://gsi.ac.upc.edu/reports/2009/43/1569208047.pdf
Collections
Share: