NtoM: a concept of operations for pilots of multiple remotely piloted aircraft 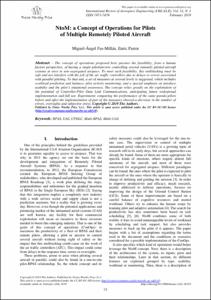 Except where otherwise noted, content on this work is licensed under a Creative Commons license : Attribution-NonCommercial-NoDerivs 3.0 Spain
Project
Abstract
The concept of operations proposed here pursues the feasibility, from a human factors perspective, of having a single pilot/aircrew controlling several remotely piloted aircraft systems at once in non-segregated airspace. To meet such feasibility, this multitasking must be safe and not interfere with the job of the air traffic controllers due to delays or errors associated with parallel piloting. To that end, a set of measures at several levels is suggested, which includes workload prediction and balance, pilot activity monitoring, and a special emphasis on interface usability and the pilot’s situational awareness. The concept relies greatly on the exploitation of the potential of Controller-Pilot Data Link Communications, anticipating future widespread implementation and full use. Experiments comparing the performance of the same pseudo-pilots before and after the implementation of part of the measures showed a decrease in the number of errors, oversights and subjective stress.
CitationFas-Millán, M.; Pastor, E. NtoM: a concept of operations for pilots of multiple remotely piloted aircraft. "International Review of Aerospace Engineering (IREASE)", Febrer 2019, vol. 12, núm. 1, p. 12-25.
URIhttp://hdl.handle.net/2117/143193
DOI10.15866/irease.v12i1.16153
ISSN1973-7459
Publisher versionhttps://www.praiseworthyprize.org/jsm/index.php?journal=irease&page=article&op=view&path%5B%5D=23004
Collections
Share: