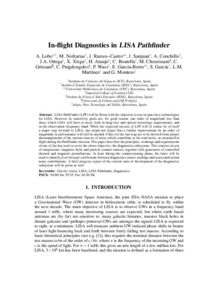 LISA PathFinder (LPF) will be flown with the objective to test in space key technologies for LISA. However its sensitivity goals are, for good reason, one order of magnitude less than those which LISA will have to meet, both in drag-free and optical metrology requirements, and in the observation frequency band. While the expected success of LPF will of course be of itself a major step forward to LISA, one might not forget that a further improvement by an order of magnitude in performance will still be needed. Clues for the last leap are to be derived from proper disentanglement of the various sources of noise which contribute to the total noise, as measured in flight during the PathFinder mission. This paper describes the principles, workings and requirements of one of the key tools to serve the above objective: the diagnostics subsystem. This consists in sets of temperature, magnetic field, and particle counter sensors, together with generators of controlled thermal and magnetic perturbations. At least during the commissioning phase, the latter will be used to identify feed-through coefficients between diagnostics sensor readings and associated actual noise contributions. A brief progress report of the current state of development of the diagnostics subsystem will be given as well.
CitationLobo, a.; Nofrarias, M.; Ramos Castro, J.; Sanjuan, J.; Conchillo, A.; Ortega, J.A.; Xirgu, X.; Araujo, H.; Boatella, C.; Chmeissani, M.; Grimani, C.; Puigdengoles, C.; Wass, P.; García-Berro, E.; García S.; Martínez, L.M.; Montero, G. In-flight Diagnostics in LISA Pathfinder. A Sixth International LISA Symposium. College Park, Maryland: American Institute of Physics, 2006. vol.873, pàgs 522-528
URIhttp://hdl.handle.net/2117/1413
ISBN978-0-7354-0372-7