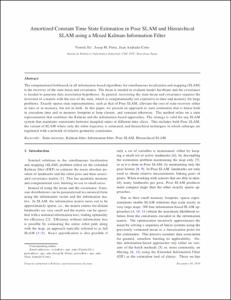 Document typeArticle
Rights accessOpen Access
Abstract
The computational bottleneck in all information-based algorithms for simultaneous localization and mapping (SLAM) is the recovery of the state mean and covariance. The mean is needed to evaluate model Jacobians and the covariance is needed to generate data association hypotheses. In general, recovering the state mean and covariance requires the inversion of a matrix with the size of the state, which is computationally too expensive in time and memory for large problems. Exactly sparse state representations, such as that of Pose SLAM, alleviate the cost of state recovery either in time or in memory, but not in both. In this paper, we present an approach to state estimation that is linear both in execution time and in memory footprint at loop closure, and constant otherwise. The method relies on a state representation that combines the Kalman and the information-based approaches. The strategy is valid for any SLAM system that maintains constraints between marginal states at different time slices. This includes both Pose SLAM, the variant of SLAM where only the robot trajectory is estimated, and hierarchical techniques in which submaps are registered with a network of relative geometric constraints.
CitationIla, V.S.; Porta Pleite, J.M.; Andrade-Cetto, J. Amortized constant time estimation in Pose SLAM and hierarchical SLAM using a mixed Kalman-information filter. "Robotics and autonomous systems", 2011, vol. 59, núm. 5, p. 310-318.
URIhttp://hdl.handle.net/2117/14111
DOI10.1016/j.robot.2011.02.010
ISSN0921-8890
Publisher versionhttp://dx.doi.org/10.1016/j.robot.2011.02.010
Collections
Share: