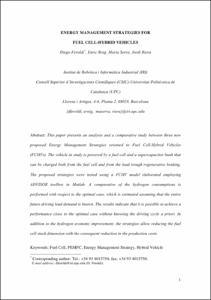 Document typeConference report
Rights accessOpen Access
All rights reserved. This work is protected by the corresponding intellectual and industrial property rights. Without prejudice to any existing legal exemptions, reproduction, distribution, public communication or transformation of this work are prohibited without permission of the copyright holder
Abstract
This paper presents an analysis and a comparative study between three new proposed Energy Management Strategies oriented to Fuel Cell-Hybrid Vehicles (FCHVs). The vehicle in study is powered by a fuel cell and a supercapacitor bank that can be charged both from the fuel cell and from the load trough regenerative braking. The proposed strategies were tested using a FCHV model elaborated employing ADVISOR toolbox in Matlab. A comparative of the hydrogen consumptions is performed with respect to the optimal case, which is estimated assuming that the entire future driving load demand is known. The results indicate that it is possible to achieve a performance close to the optimal case without knowing the driving cycle a priori. In addition to the hydrogen economy improvement, the strategies allow reducing the fuel cell stack dimension with the consequent reduction in the production costs.
CitationFeroldi, D.H. [et al.]. Energy management strategies for fuel cell-hybrid vehicles. A: Simposium Ibérico de Hidrógeno, Pilas de Combustible y Baterías Avanzadas. "Proceedings of I Simposium Ibérico de Hidrógeno, Pilas de Combustible y Baterías Avanzadas". 2008, p. 1-26.
URIhttp://hdl.handle.net/2117/14079
Publisher versionhttp://weblogs.madrimasd.org/energiasalternativas/archive/2008/07/11/96680.aspx
Collections
Share: