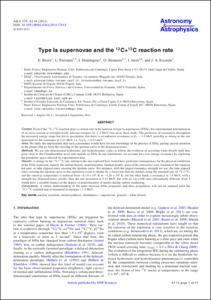 Piersanti, Luciano
Domínguez, Inmaculada
Straniero, Oscar
Isern Vilaboy, Jordi
Escartín Vigo, José Antonio
Document typeArticle
Rights accessOpen Access
Abstract
Context. Even if the 12C+12C reaction plays a central role in the ignition of type Ia supernovae (SNIa), the experimental determination of its cross-section at astrophysically relevant energies (E ≲ 2 MeV) has never been made. The profusion of resonances throughout the measured energy range has led to speculation that there is an unknown resonance at E0 ~ 1.5 MeV possibly as strong as the one measured for the resonance at 2.14 MeV, i.e. (ωγ)R = 0.13 meV. Aims. We study the implications that such a resonance would have for our knowledge of the physics of SNIa, paying special attention to the phases that go from the crossing of the ignition curve to the dynamical event. Methods. We use one-dimensional hydrostatic and hydrodynamic codes to follow the evolution of accreting white dwarfs until they grow close to the Chandrasekhar mass and explode as SNIa. In our simulations, we account for a low-energy resonance by exploring the parameter space allowed by experimental data. Results. A change in the 12C+12C rate similar to the one explored here would have profound consequences for the physical conditions in the SNIa explosion, namely the central density, neutronization, thermal profile, mass of the convective core, location of the runaway hot spot, or time elapsed since crossing the ignition curve. For instance, with the largest resonance strength we use, the time elapsed since crossing the ignition curve to the supernova event is shorter by a factor ten than for models using the standard rate of 12C+12C, and the runaway temperature is reduced from ~8.14 × 108 K to ~ 4.26 × 108 K. On the other hand, a resonance at 1.5 MeV, with a strength ten thousand times smaller than the one measured at 2.14 MeV, but with an α/p yield ratio substantially different from 1 would have a sizeable impact on the degree of neutronization of matter during carbon simmering. Conclusions. A robust understanding of the links between SNIa properties and their progenitors will not be attained until the 12C+12C reaction rate is measured at energies ~1.5 MeV.
CitationBravo, E. [et al.]. Type Ia supernovae and the 12C+12C reaction rate. "Astronomy and astrophysics", 22 Novembre 2011, vol. 535, núm. November, p. A114-1-A114-15.
URIhttp://hdl.handle.net/2117/14078
DOI10.1051/0004-6361/201117814
ISSN0004-6361
Publisher versionhttp://dx.doi.org/10.1051/0004-6361/201117814
Collections
Share: