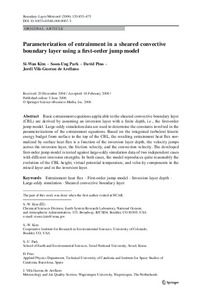 Basic entrainment equations applicable to the sheared convective boundary layer (CBL) are derived by assuming an inversion layer with a finite depth, i.e., the first-order jump model. Large-eddy simulation data are used to determine the constants involved in the parameterizations of the entrainment equations. Based on the integrated turbulent kinetic energy budget from surface to the top of the CBL, the resulting entrainment heat flux normalized by surface heat flux is a function of the inversion layer depth, the velocity jumps across the inversion layer, the friction velocity, and the convection velocity. The developed first-order jump model is tested against large-eddy simulation data of two independent cases with different inversion strengths. In both cases, the model reproduces quite reasonably the evolution of the CBL height, virtual potential temperature, and velocity components in the mixed layer and in the inversion layer.
CitationKim., S-W, Park, S-U, Pino, D., Vilà-Guerau de Arellano, J. Parameterization of entrainment in a sheared convective boundary layer using a first-order jump model. Boundary-Layer Meteorology. 2006, 120, 455-475
URIhttp://hdl.handle.net/2117/1406
ISSN0006-8314