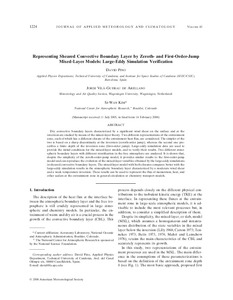 Dry convective boundary layers characterized by a significant wind shear on the surface and at the inversion are studied by means of the mixed-layer theory. Two different representations of the entrainment zone, each of which has a different closure of the entrainment heat flux, are considered. The simpler of the two is based on a sharp discontinuity at the inversion (zeroth-order jump), whereas the second one prescribes a finite depth of the inversion zone (first-order jump). Large-eddy simulation data are used to provide the initial conditions for the mixed-layer models, and to verify their results. Two different atmospheric boundary layers with different stratification in the free atmosphere are analyzed. It is shown that, despite the simplicity of the zeroth-order-jump model, it provides similar results to the first-order-jump model and can reproduce the evolution of the mixed-layer variables obtained by the large-eddy simulations in sheared convective boundary layers. The mixed-layer model with both closures compares better with the large-eddy simulation results in the atmospheric boundary layer characterized by a moderate wind shear and a weak temperature inversion. These results can be used to represent the flux of momentum, heat, and other scalars at the entrainment zone in general circulation or chemistry transport models.
CitationPino, D., Vilà-Guerau de Arellano, Kim, S. -W. Representing Sheared Convective Boundary Layer by Zeroth- and First-Order-Jump. Journal of Applied Meteorology and Climatology. 2006, 45, 1224-1243
URIhttp://hdl.handle.net/2117/1402
ISSN1558-8432