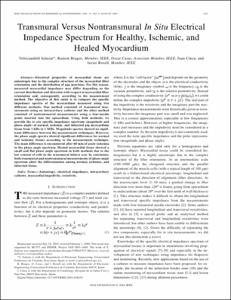 Document typeArticle
PublisherIEEE-INST ELECTRICAL ELECTRONICS ENGINEERS INC
Rights accessOpen Access
Abstract
Electrical properties of myocardial tissue are anisotropic due to the complex structure of the myocardial fiber orientation and the distribution of gap junctions. For this reason, measured myocardial impedance may differ depending on the current distribution and direction with respect to myocardial fiber orientation and, consequently, according to the measurement method. The objective of this study is to compare the specific impedance spectra of the myocardium measured using two different methods. One method consisted of transmural measurements using an intracavitary catheter and the other method consisted of nontransmural measurements using a four-needle probe inserted into the epicardium. Using both methods, we provide the in situ specific impedance spectrum (magnitude and phase angle) of normal, ischemic, and infarcted pig myocardium tissue from 1 kHz to 1 MHz. Magnitude spectra showed no significant differences between the measurement techniques. However, the phase angle spectra showed significant differences for normal and ischemic tissues according to the measurement technique. The main difference is encountered after 60 min of acute ischemia in the phase angle spectrum. Healed myocardial tissue showed a small and flat phase angle spectrum in both methods due to the low content of cells in the transmural infarct scar. In conclusion, both transmural and nontransmural measurements of phase angle spectrum allow the differentiation among normal, ischemic, and infarcted tissue.
CitationSalazar,Y; Bragos, R; Casas, O; Cinca, J; Rosell, J. Transmural versus non-transmural in situ electrical impedance spectrum for healthy, ischemic, and healed myocardium. IEEE Transactions on Biomedical Engineering, 2004, vol. 51, núm. 8, p. 1421-1427
URIhttp://hdl.handle.net/2117/1400
ISSN0018-9294
Collections
Share: