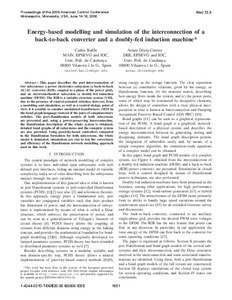 Document typeConference report
PublisherInstitute of Electrical and Electronics Engineers
Rights accessOpen Access
Abstract
This paper describes the port interconnection of two subsystems: a power electronics subsystem (a back-to-back AC/AC converter (B2B), coupled to a phase of the power grid), and an electromechanical subsystem (a doubly-fed induction machine (DFIM). The B2B is a variable structure system (VSS), due to the presence of control-actuated switches; however, from a modelling and simulation, as well as a control-design, point of view, it is sensible to consider modulated transformers (MTF in the bond graph language) instead of the pairs of complementary switches. The port-Hamiltonian models of both subsystems are presented and, using a power-preserving interconnection, the Hamiltonian description of the whole system is obtained; detailed bond graphs of all subsystems and the complete system are also provided. Using passivity-based controllers computed in the Hamiltonian formalism for both subsystems, the whole model is simulated; simulations are run to test the correctness and efficiency of the Hamiltonian network modelling approach used in this work.
CitationBatlle Arnau, C.; Dòria Cerezo, A. Energy-based modelling and simulation of the interconnection of a back-to-back converter and a doubly-fed induction machine. A: Proceedings of the 2006 American Control Conference. [Piscataway, NJ]: Institute of Electrical and Electronics Engineers, 2006, p. 1851-1856.
URIhttp://hdl.handle.net/2117/1386
ISBN1424402107
Collections
Share: