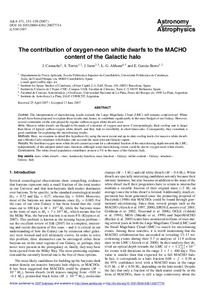 Document typeArticle
Rights accessOpen Access
All rights reserved. This work is protected by the corresponding intellectual and industrial property rights. Without prejudice to any existing legal exemptions, reproduction, distribution, public communication or transformation of this work are prohibited without permission of the copyright holder
Abstract
Context. The interpretation of microlensing results towards the Large Magellanic Cloud (LMC) still remains controversial. White dwarfs have been proposed to explain these results and, hence, to contribute significantly to the mass budget of our Galaxy. However, several constraints on the role played by regular carbon-oxygen white dwarfs exist. Aims. Massive white dwarfs are thought to be made of a mixture of oxygen and neon. Correspondingly, their cooling rate is larger than those of typical carbon-oxygen white dwarfs and they fade to invisibility in short timescales. Consequently, they constitute a good candidate for explaining the microlensing results. Methods. Here, we examine in detail this hypothesis by using the most recent and up-to-date cooling tracks for massive white dwarfs and a Monte Carlo simulator which takes into account the most relevant Galactic inputs. Results.We find that oxygen-neon white dwarfs cannot account for a substantial fraction of the microlensing depth towards the LMC,independently of the adopted initial mass function, although some microlensing events could be due to oxygen-neon white dwarfs. Conclusions.The white dwarf population contributes at most a 5% to the mass of the Galactic halo.
CitationCamacho Díaz, J.; Torres Gil, S.; Isern Villaboy, J.; Althaus, L.; García-Berro Montilla, E. The contribution of oxygen-neon white dwarfs to the MACHO content of the Galactic halo. Astronomy & Astrophysics, 2007, vol. 471, p 151-158
URIhttp://hdl.handle.net/2117/1373
ISSN0365-0138
Collections
Share: