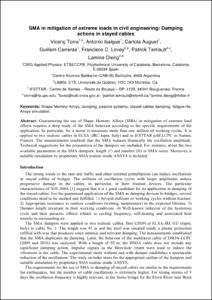 Guaranteeing the use of Shape Memory Alloys (SMA) in mitigation of extreme load effects requires a deep study of the SMA behavior according to the specific requirements of the application. In particular, for a storm is necessary more than one million of working cycles. It is applied to two realistic cables in ELSA (JRC-Ispra, Italy) and in IFSTTAR (old LCPC in Nantes, France). The measurements establish that the SMA reduces drastically the oscillation amplitude. Technical suggestions for the preparation of the dampers are included. For instance, about the two available parameters in the SMA dampers: length () and number (N) of SMA wires. Moreover, a suitable simulation by proprietary SMA routine inside ANSYS is included.
URIhttp://hdl.handle.net/2117/13695
DOI10.4028/www.scientific.net/AMM.82.539
ISSN1660-9336
Publisher versionhttp://www.scientific.net/AMM.82.539