SMA in mitigation of extreme loads in civil engineering: study of their application in a realistic steel portico 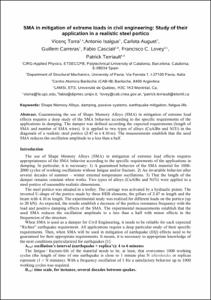 Except where otherwise noted, content on this work is licensed under a Creative Commons license : Attribution-NonCommercial-NoDerivs 3.0 Spain
Abstract
Guaranteeing the use of Shape Memory Alloys (SMA) in mitigation of extreme load effects requires a deep study of the SMA behavior according to the specific requirements of the applications in damping. The damper was defined according the expected requirements (length of SMA and number of SMA wires). It is applied to two types of alloys (CuAlBe and NiTi) in the diagonals of a realistic steel portico (2.47 m x 4.10 m). The measurements establish that the used SMA reduces the oscillation amplitude to a less than a half.
CitationTorra Ferré, V. [et al.]. SMA in mitigation of extreme loads in civil engineering: study of their application in a realistic steel portico. "Applied mechanics and materials", Octubre 2011, vol. 82, p. 278-283.
URIhttp://hdl.handle.net/2117/13694
DOI10.4028/www.scientific.net/AMM.82.278
ISSN1660-9336
Publisher versionhttp://www.scientific.net/AMM.82.278
Collections
Share: