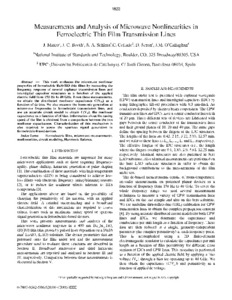 This work evaluates the microwave nonlinear properties of ferroelectric BaSrTiO thin films by measuring the frequency response of several coplanar transmission lines and interdigital capacitor structures as a function of the applied electric field from 150 Hz to 40 GHz. From these measurements, we obtain the distributed nonlinear capacitance C(Vdc) as a function of dc bias. We also measure the harmonic generation at microwave frequencies in ferroelectric transmission lines, and use an accurate circuit model to obtain C(Vrf), the nonlinear capacitance as a function of RF bias. Information about the tuning speed of the film is obtained from a comparison between the two nonlinear capacitances. Characterization of this mechanism is also required to assess the spurious signal generation in ferroelectric-based devices
CitationMateu, J.; Booth, J. C.; Schima, S. A.; Collado, J. C.; Seron, D.; O'Callaghan, J. Measurements and analysis of microwave nonlinearities in ferroelectric thin film transmission lines. IEEE MTT-S International Microwave Symposium Digest, 2006. New York: Institute of Electrical and Electronic Engineers, 2006, p. 1622-1625.
URIhttp://hdl.handle.net/2117/1364
ISSN0149-645X