Heating of a tissue by near nield exposure to a dipole: a model analysis 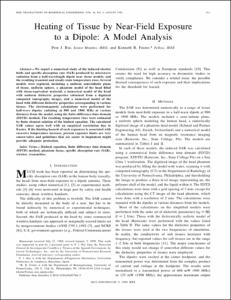 We report a numerical study of the induced electric fields and specific absorption rate (SAR) produced by microwave radiation from a half-wavelength dipole near tissue models, and the resulting transient and steady-state temperature rises. Several models were explored, including a uniform emi-infinite plane of tissue, uniform sphere, a phantom model of the head filled with tissue-equivalent material, a numerical model of the head with uniform dielectric properties (obtained from a digitized computed tomography image), and a numerical model of the head with different dielectric properties corresponding to various tissues. The electromagnetic calculations were performed for half-wave dipoles radiating at 900 and 1900 MHz at various distances from the model, using the finite-difference-time-domain (FDTD) method. The resulting temperature rises were estimated by finite element solution of the bioheat equation. The calculated SAR values agree well with an empirical correlation due to Kuster. If the limiting hazard of such exposures is associated with excessive temperature increase, present exposure limits are very conservative and guidelines that are easier to implement might provide adequate protection.
CitationRiu, PJ; Foster, KR. Heating of a tissue by near field exposure to a dipole: a model analysis. IEEE Transactions on Biomedical Engineering, 1999 vol.46, núm.8, p. 911-917
URIhttp://hdl.handle.net/2117/1358
ISSN0018-9294