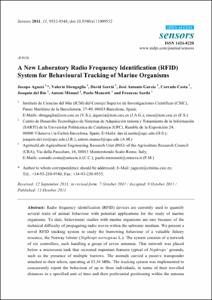 Menesatti, Paolo
Document typeArticle
Rights accessOpen Access
All rights reserved. This work is protected by the corresponding intellectual and industrial property rights. Without prejudice to any existing legal exemptions, reproduction, distribution, public communication or transformation of this work are prohibited without permission of the copyright holder
Abstract
Radio frequency identification (RFID) devices are currently used to quantify several traits of animal behaviour with potential applications for the study of marine organisms. To date, behavioural studies with marine organisms are rare because of the technical difficulty of propagating radio waves within the saltwater medium. We present a novel RFID tracking system to study the burrowing behaviour of a valuable fishery resource, the Norway lobster (Nephrops norvegicus L.). The system consists of a network of six controllers, each handling a group of seven antennas. That network was placed below a microcosm tank that recreated important features typical of Nephrops’ grounds, such as the presence of multiple burrows. The animals carried a passive transponder attached to their telson, operating at 13.56 MHz. The tracking system was implemented to concurrently report the behaviour of up to three individuals, in terms of their travelled distances in a specified unit of time and their preferential positioning within the antenna network. To do so, the controllers worked in parallel to send the antenna data to a computer via a USB connection. The tracking accuracy of the system was evaluated by concurrently recording the animals’ behaviour with automated video imaging. During the two experiments, each lasting approximately one week, two different groups of three animals each showed a variable burrow occupancy and a nocturnal displacement under a standard photoperiod regime (12 h light:12 h dark), measured using the RFID method. Similar results were obtained with the video imaging. Our implemented RFID system was therefore capable of efficiently tracking the tested organisms and has a good potential for use on a wide variety of other marine organisms of commercial, aquaculture, and ecological interest.
CitationAguzzi, J. [et al.]. A new laboratory radio frequency identification (RFID) system for behavioural tracking of marine organisms. "Sensors", 11 Octubre 2011, vol. 11, núm. 10, p. 9532-9548.
URIhttp://hdl.handle.net/2117/13516
DOI10.3390/s111009532
ISSN1424-8220
Publisher versionhttp://www.mdpi.com/1424-8220/11/10/
Collections
Share: