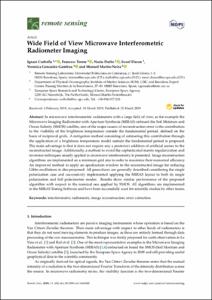 Except where otherwise noted, content on this work is licensed under a Creative Commons license : Attribution-NonCommercial-NoDerivs 3.0 Spain
ProjectOPTIMIZACION DE LAS PRESTACIONES DE SMOS Y FUTURAS MISIONES (MINECO-TEC2014-58582-R)
PRODUCTOS Y SERVICIOS INNOVADORES CON SENSORES DE MICROONDAS, SMOS Y SENTINELS PARA TIERRA (MINECO-ESP2015-67549-C3-1-R)
Abstract
In microwave interferometric radiometers with a large field of view, as for example the Microwave Imaging Radiometer with Aperture Synthesis (MIRAS) onboard the Soil Moisture and Ocean Salinity (SMOS) satellite, one of the major causes of reconstruction error is the contribution to the visibility of the brightness temperature outside the fundamental period, defined on the basis of reciprocal grids. A mitigation method consisting of estimating this contribution through the application of a brightness temperature model outside the fundamental period is proposed. The main advantage is that it does not require any a posteriori addition of artificial scenes to the reconstructed image. Additionally, a method to avoid the sophisticated matrix regularization and inversion techniques usually applied in microwave interferometry is presented. Image reconstruction algorithms are implemented on a minimum grid size in order to maximize their numerical efficiency. An improved method to apply an apodization window to the reconstructed image for reducing Gibbs oscillations is also proposed. All procedures are generally described considering the single polarization case and successively implemented applying the MIRAS layout in both its single polarization and full polarimetric modes. Results show similar performance of the proposed algorithm with respect to the nominal one applied by SMOS. All algorithms are implemented in the MIRAS Testing Software and have been successfully used for scientific studies by other teams.
CitationCorbella, I. [et al.]. Wide field of view microwave interferometric radiometer imaging. "Remote sensing", 2 Març 2019, vol. 11, núm. 6, p. 1-17.
URIhttp://hdl.handle.net/2117/134947
DOI10.3390/rs11060682
ISSN2072-4292
Publisher versionhttps://www.mdpi.com/2072-4292/11/6/682
Collections
Share: