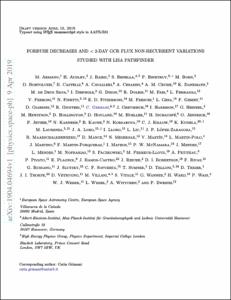 Non-recurrent short-term variations of the galactic cosmic-ray (GCR) flux above 70 MeV n-1 were observed between 2016 February 18 and 2017 July 3 on board the European Space Agency LISA Pathfinder (LPF) mission orbiting around the Lagrange point L1 at 1.5 × 106 km from Earth. The energy dependence of three Forbush decreases is studied and reported here. A comparison of these observations with others carried out in space down to the energy of a few tens of MeV n-1 shows that the same GCR flux parameterization applies to events of different intensity during the main phase. FD observations in L1 with LPF and geomagnetic storm occurrence are also presented. Finally, the characteristics of GCR flux non-recurrent variations (peaks and depressions) of duration <2 days and their association with interplanetary structures are investigated. It is found that, most likely, plasma compression regions between subsequent corotating high-speed streams cause peaks, while heliospheric current sheet crossing causes the majority of the depressions.
CitationArmano, M. [et al.]. Forbush decreases and <2 day GCR flux non-recurrent variations studied with LISA pathfinder. "The astrophysical journal letters", 1 Abril 2019, vol. 874, núm. 2, p. 1-32.
URIhttp://hdl.handle.net/2117/134946
DOI10.3847/1538-4357/ab0c99
ISSN1538-4357
Publisher versionhttps://iopscience.iop.org/article/10.3847/1538-4357/ab0c99/meta
Other identifiershttps://arxiv.org/abs/1904.04694