Assessing the mapping of quantum algorithms on superconducting quantum processors 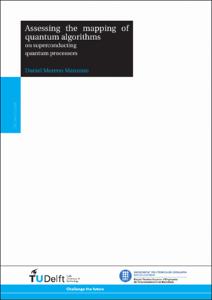 Document typeMaster thesis
Rights accessOpen Access
Abstract
Quantum computers hold the promise for solving efficiently important problems in computational sciences that are intractable nowadays by exploiting quantum phenomena such are superposition and entanglement. Research in quantum computing is mainly driven by the development of quantum devices and quantum algorithms. Quantum algorithms can be described by quantum circuits, which are hardware agnostic -- e.g it is assumed that any arbitrary interaction between qubits is possible. However, real quantum processors have a series of constraints that must be complied to when running a quantum algorithm. Therefore, a mapping process that adapts the quantum circuit to chip's constraints is required. The mapping process will, in general, increase the number of gates and/or the circuit depth. As qubits and gates are error prone, it will result in an increment of the failure rate of computation while running the adapted quantum algorithm in a given quantum device. Most of the current mapping models optimize and are assessed based on two metrics: circuit depth (or latency) and number of (movement) operations added; they should be as minimal as possible. However, these metrics are not giving any information about how the mapping process is affecting the reliability of the algorithm. In other words, can still the algorithm produce `good' results after being mapped? The aim of this thesis is to propose some new mapping metrics that allow to study the impact of the mapping process on the algorithm's reliability. These are, quantum fidelity, probability of success of the algorithm and quantum volume. They could be used not only to assess the quality of the mapping procedure but also as parameters to be optimized by the mapping. To this purpose, different quantum algorithms have been mapped into the superconducting quantum processor, called Surface-17, developed at QuTech.
Description
Quantum computing is a promising field regarding computation capabilities for several important tasks. One of the most promising solid-state quantum technology, which is being developed at Qutech (TU Delft), is superconducting qubits. In superconducting quantum processors, qubits are arranged along a 2D grid that only permits information transmission between adjacent qubits. In order to run a quantum algorithm on such a processor a mapping strategy of scheduling-placement-routing is needed.
SubjectsQuantum computing, Algorithms, Programació quàntica, Algorismes
URIhttp://hdl.handle.net/2117/134893
Collections
Share: