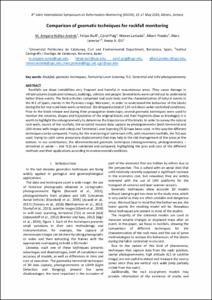 Except where otherwise noted, content on this work is licensed under a Creative Commons license : Attribution-NonCommercial-NoDerivs 3.0 Spain
Abstract
Rockfalls are slope instabilities very frequent and harmful in mountainous areas. They cause damage in infrastructures (roads and railways), buildings, vehicles and people.Several testswerecarried out to understand better these events. The field activities comprised real scale tests and the characterization of natural events in the N-E of Spain, mainly in the Pyrenees range. Moreover, in order to understand the behaviourof the blocks during the fall real scale tests were carried out. We dropped a total of 124 rock blocs under controlled conditions. Prior to the block release and during their propagation downslope, several geomatic techniques wereused to monitor the volumes, shapes and trajectories ofthe original blocks and their fragments (due to breakage); it is worth to highlight the videogrammetry to determinethe trajectoriesof the blocks. In order to survey the natural rock walls,source of the rockfalls, the so-called massive data capture by photogrammetry (both terrestrial and UAV-drone with image and video) and Terrestrial Laser Scanning(TLS) have been used, in this way the different techniques can be compared. Finally, for the monitoring of some rock cliffs, with recurrent rockfalls, the TLS was used, trying to catch some precursory displacements that may help in the risk management of the areas at the bottom. In our contribution, the aforementioned geomatic techniques (videogrammetry, photogrammetry –terrestrial or aerial --, and TLS) are combined and compared, highlighting the pros and cons of the different methods and their applications according to environmental conditions.
Location
1: Monistrol de Montserrat, Barcelona, Espanya
CitationNúñez-Andrés, M.A. [et al.]. Comparison of several geomatic techniques for rockfall monitoring. A: Joint International Symposium on Deformation Monitoring. "JISDM 2019 4th Joint International Symposium on Deformation Monitoring : 15-17 May 2019Eugenides FoundationAthens, Greece : Proceedings". 2019, p. 1-7.
URIhttp://hdl.handle.net/2117/134891
Publisher versionhttps://jisdm2019.org/wp-content/uploads/2019/05/125.pdf
Collections
Share: