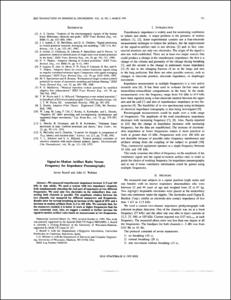 We measured transthoracic impedance between 12.5 and 185 kHz in nine adults. We used a system with two impedance channels, both simultaneously detecting the real part of impedance at two different frequencies. We used only two electrodes in the midaxillary line, connecting both channels in parallel. The amplitude relation between the two channels was measured for different maneuvers and frequencies. Results show for normal breathing an increase of the signal of 20% and a decrease in motion artifacts from 12.5 to 185 kHz. We conclude that, for the maneuvers studied, it is better to work at higher frequencies than the ones commonly used. Also, we suggest a method to further increase the signal-to-motion artifact ratio based on measurement at two frequencies.
CitationRosell, J; Webster, GJ. Signal-to-motion artifact ratio versus frequency for impedance pneumograhy. IEEE Transactions on Biomedical Engineering, 1995, vol. 42, núm.3, p. 321-323
URIhttp://hdl.handle.net/2117/1348
ISSN0018-9294