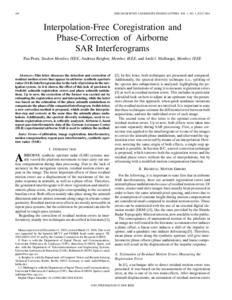 This letter discusses the detection and correction of residual motion errors that appear in airborne synthetic aperture radar (SAR) interferograms due to the lack of precision in the navigation system. As it is shown, the effect of this lack of precision is twofold: azimuth registration errors and phase azimuth undulations. Up to now, the correction of the former was carried out by estimating the registration error and interpolating, while the latter was based on the estimation of the phase azimuth undulations to compensate the phase of the computed interferogram. In this letter, a new correction method is proposed, which avoids the interpolation step and corrects at the same time the azimuth phase undulations. Additionally, the spectral diversity technique, used to estimate registration errors, is critically analyzed. Airborne L-band repeat-pass interferometric data of the German Aerospace Center (DLR) experimental airborne SAR is used to validate the method
CitationP. Prats, A. Reigber, J.J. Mallorquí. (2004). Interpolation-free Coregistration and Phase-Correction of Airborne SAR Interferograms. IEEE Geoscience and remote sensing letters, 1 (3): 188-191. ISSN:1545-598X
URIhttp://hdl.handle.net/2117/13477
ISSN1545-598X