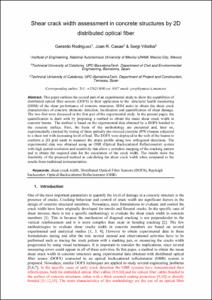 Document typeArticle
PublisherElsevier
Rights accessOpen Access
Abstract
This paper outlines the second part of an experimental study to show the capabilities of distributed optical fiber sensors (DOFS) in their application to the structural health monitoring (SHM) of the shear performance of concrete structures. SHM seeks to obtain the shear crack characteristics of concrete elements: detection, localization and quantification of shear damage. The two first were discussed in the first part of the experimental study. In the present paper, the quantification is dealt with by proposing a method to obtain the mean shear crack width in concrete beams. The method is based on the experimental data obtained by a DOFS bonded to the concrete surface. First, the basis of the methodology are presented and, later on, experimentally checked by testing of three partially pre-stressed concrete (PPC) beams subjected to a shear test with increasing level of load. The DOFS were deployed in the web of the beams to conform a 2D grid mesh to measure the strain profile along two orthogonal directions. The experimental data was obtained using an OBR (Optical Backscattered Reflectometer) system with high spatial resolution and sensitivity that allow a complete mapping of the cracking pattern and to obtain the required data for the calculation of the crack width. The results show the feasibility of the proposed method in calculating the shear crack width when compared to the results from traditional instrumentation
CitationRodríguez, G.; Casas, J.; Villalba, S. Shear crack width assessment in concrete structures by 2D distributed optical fiber. "Engineering structures", Setembre 2019, vol. 195, p. 508-523.
URIhttp://hdl.handle.net/2117/134692
DOI10.1016/j.engstruct.2019.05.079
ISSN1873-7323
Publisher versionhttps://www.sciencedirect.com/science/article/pii/S0141029618330682
Collections
Share: