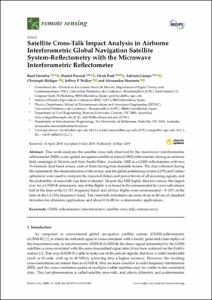 Except where otherwise noted, content on this work is licensed under a Creative Commons license : Attribution-NonCommercial-NoDerivs 3.0 Spain
Abstract
This work analyzes the satellite cross-talk observed by the microwave interferometric reflectometer (MIR), a new global navigation satellite system (GNSS) reflectometer, during an airborne field campaign in Victoria and New South Wales, Australia. MIR is a GNSS reflectometer with two 19-element, dual-band arrays, each of them having four steerable beams. The data collected during the experiment, the characterization of the arrays, and the global positioning system (GPS) and Galileo ephemeris were used to compute the expected delays and power levels of all incoming signals, and the probability of cross-talk was then evaluated. Despite the MIR highly directive arrays, the largest ever for a GNSS-R instrument, one of the flights was found to be contaminated by cross-talk almost half of the time at the L1/E1 frequency band, and all four flights were contaminated ~5–10% of the time at the L5/E5a frequency band. The cross-talk introduces an error of up to 40 cm of standard deviation for altimetric applications and about 0.24 dB for scatterometric applications
CitationOnrubia, R. [et al.]. Satellite cross-talk impact analysis in airborne interferometric global navigation satellite system-reflectometry with the microwave interferometric reflectometer. "Remote sensing", 1 Maig 2019, vol. 11, núm. 9, p. 1-11.
URIhttp://hdl.handle.net/2117/134454
DOI10.3390/rs11091120
ISSN2072-4292
Publisher versionhttps://www.mdpi.com/2072-4292/11/9/1120
Collections
Share: