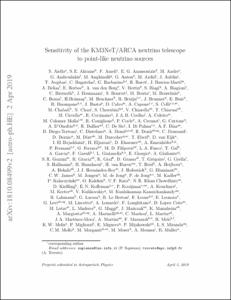 Anassontzis, E.G.
Document typeArticle
Rights accessOpen Access
Abstract
KM3NeT will be a network of deep-sea neutrino telescopes in the Mediterranean Sea. The KM3NeT/ARCA detector, to be installed at the Capo Passero site (Italy), is optimised for the detection of high-energy neutrinos of cosmic origin. Thanks to its geographical location on the Northern hemisphere, KM3NeT/ARCA can observe upgoing neutrinos from most of the Galactic Plane, including the Galactic Centre. Given its effective area and excellent pointing resolution, KM3NeT/ARCA will measure or significantly constrain the neutrino flux from potential astrophysical neutrino sources. At the same time, it will test flux predictions based on gamma-ray measurements and the assumption that the gamma-ray flux is of hadronic origin. Assuming this scenario, discovery potentials and sensitivities for a selected list of Galactic sources and to generic point sources with an E−2 spectrum are presented. These spectra are assumed to be time independent. The results indicate that an observation with 3σ significance is possible in about six years of operation for the most intense sources, such as Supernovae Remnants RX J1713.7-3946 and Vela Jr. If no signal will be found during this time, the fraction of the gamma-ray flux coming from hadronic processes can be constrained to be below 50% for these two objects
CitationAiello, S. [et al.]. Sensitivity of the KM3NeT/ARCA neutrino telescope to point-like neutrino sources. "Astroparticle physics", 1 Setembre 2019, vol. 111.
URIhttp://hdl.handle.net/2117/134441
DOI10.1016/j.astropartphys.2019.04.002
ISSN0927-6505
Publisher versionhttps://www.sciencedirect.com/science/article/pii/S0927650518302809
Collections
Share: