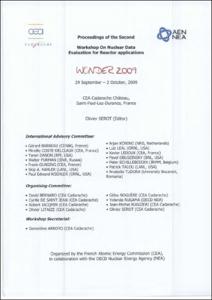 The Neutron Time of Flight facility n_TOF located at CERN started to take data in 2001 . Due to an increase of radioactivity released in the cooling water the experiment was stopped by end of 2004 . In 2008 a new spallation target has been installed . In 2009 the collaboration has performed the full commissioning of the facility, consisting in the determination of the fluence, the beam profile, and the energy resolution of the neutron beam. After a brief description of the new target assembly, very preliminary results concerning the shape of the neutron fluence and its absolute value will be given. Measurements of the neutron beam profile will also be shown.
CitationBerthoumieux, E. [et al.]. First results of the new n_TOF spallation target commissioning. A: International Workshop on Nuclear Data Evaluation for Reactor Applications. "Proceedings of the 2nd Workshop On Nuclear Data Evaluation for Reactor applications". 2009, p. 14-19.
URIhttp://hdl.handle.net/2117/134408