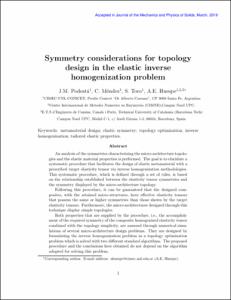 Except where otherwise noted, content on this work is licensed under a Creative Commons license : Attribution-NonCommercial-NoDerivs 3.0 Spain
Abstract
An analysis of the symmetries characterizing the micro-architecture topologies and the elastic material properties is performed. The goal is to elucidate a systematic procedure that facilitates the design of elastic metamaterial with a prescribed target elasticity tensor via inverse homogenization methodologies. This systematic procedure, which is defined through a set of rules, is based on the relationship established between the elasticity tensor symmetries and the symmetry displayed by the micro-architecture topology. Following this procedure, it can be guaranteed that the designed composites, with the attained micro-structures, have effective elasticity tensors that possess the same or higher symmetries than those shown by the target elasticity tensors. Furthermore, the micro-architectures designed through this technique display simple topologies. Both properties that are supplied by the procedure, i.e., the accomplishment of the required symmetry of the composite homogenized elasticity tensor combined with the topology simplicity, are assessed through numerical simulations of several micro-architecture design problems. They are designed by formulating the inverse homogenization problem as a topology optimization problem which is solved with two different standard algorithms. The proposed procedure and the conclusions here obtained do not depend on the algorithm adopted for solving this problem.
CitationPodestá, J. [et al.]. Symmetry considerations for topology design in the elastic inverse homogenization problem. "Journal of the mechanics and physics of solids", Juliol 2019, vol. 128, p. 54-78.
URIhttp://hdl.handle.net/2117/134365
DOI10.1016/j.jmps.2019.03.018
ISSN0022-5096
Publisher versionhttps://www.sciencedirect.com/science/article/pii/S0022509618305210
Other identifiershttps://www.researchgate.net/publication/331970451_Symmetry_considerations_for_topology_design_in_the_elastic_inverse_homogenization_problem
Collections
Share: