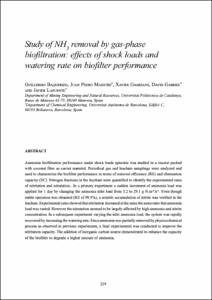 Gabriel Buguña, David
Lafuente Sancho, Francisco Javier
Document typeConference report
PublisherUniversidade da Coruña
Rights accessOpen Access
Abstract
Ammonia biofiltration performance under shock loads episodes was studied in a reactor packed with coconut fiber as carrier material. Periodical gas and leachate samplings were analyzed and used to characterize the biofilter performance in terms of removal efficiency (RE) and elimination capacity (EC). Nitrogen fractions in the leachate were quantified to identify the experimental rates of nitritation and nitratation.. In a primary experiment a sudden increment of ammonia load was applied for 1 day by changing the ammonia inlet load from 5.2 to 29.1 g N.m-3.h-1. Even though stable operation was obtained (RE of 99.9%), a notable accumulation of nitrite was verified in the leachate. Experimental rates showed that nitritation increased at the same the same ratio that ammonia load was varied. However the nitratation seemed to be largely affected by high ammonia and nitrite concentration. In a subsequent experiment varying the inlet ammonia load, the system was rapidly recovered by increasing the watering rate. Since ammonia was partially removed by physicochemical process as observed in previous experiments, a final experimental was conducted to improve the nitritation capacity. The addition of inorganic carbon source demonstrated to enhance the capacity of the biofilter to degrade a higher amount of ammonia.
CitationBaquerizo, G. [et al.]. Study of NH3 removal by gas-phase biofiltration: effects of shock loads and watering rate on biofilter performance. A: Biotechniques for Air Pollution Control. "Biotechniques for air pollution control". Universidade da Coruña, 2007, p. 239-249.
URIhttp://hdl.handle.net/2117/134338
ISBN978-84-9749-258-4
Other identifiershttp://hdl.handle.net/2183/12816
Collections
Share: