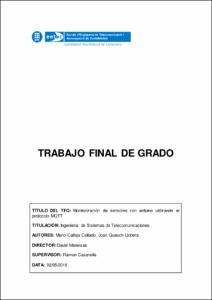 ; Matanzas Rexachs, David
Document typeBachelor thesis
Rights accessOpen Access
Abstract
We live in an era in which technology is very important and it is being implemented in all aspects (work, public services, housing, etc.). It is because of this that there are emerging new services and new methods of implementation based on IoT. These services and protocols need to be studied before and during the implementation to be able to be updated and adapted properly to the needs of the users, whether they are particular clients or corporations. For this reason, in this project a solution has been documented, which has as its target the implementation of a protocol, MQTT, for the management of components, like LEDs and sensors (humidity, temperature, gas, presence, sound, etc.). With these components, service can be given to certain basic needs that consumers may have. On the other side, if it is about devices that require a big data flow and a certain transmission speed, as it could be with surveillance cameras, other protocols such as RTSP and HTTP should be used among others. Taking a look on the fact that this project is based on the use of simple sensors, the MQTT protocol is used, where the main characteristic is that communication when M2M is performed, that is to say, there is a master and one or more slaves, requires little bandwidth and low consumption, so it is ideal for sensors that only transmit information from time to time. Another feature is that it is easy to define in which spaces the sensors are distributed since the method of publishing and subscribing to topics is used. To conclude, an assembly has been made as a scheme of what could be implemented in a real situation, with an LED and both a humidity and temperature sensor, where the communication is established through the MQTT protocol and a broker in the cloud, where you can subscribe to the topics of temperature, humidity and turn on/off the LEDs.
SubjectsArduino (Programmable controller), Internet of things, Internet programming, Arduino (Controlador programable), Internet -- Protocols, Internet de les coses
DegreeGRAU EN ENGINYERIA DE SISTEMES DE TELECOMUNICACIÓ (Pla 2009)
URIhttp://hdl.handle.net/2117/134193
Collections
Share: