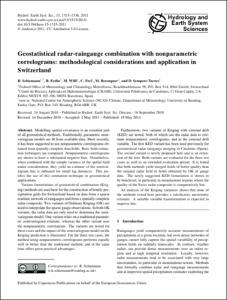 Modelling spatial covariance is an essential part of all geostatistical methods. Traditionally, parametric semivariogram models are fit from available data. More recently, it has been suggested to use nonparametric correlograms obtained from spatially complete data fields. Here, both estimation techniques are compared. Nonparametric correlograms are shown to have a substantial negative bias. Nonetheless, when combined with the sample variance of the spatial field under consideration, they yield an estimate of the semivariogram that is unbiased for small lag distances. This justifies the use of this estimation technique in geostatistical applications. Various formulations of geostatistical combination (Kriging) methods are used here for the construction of hourly precipitation grids for Switzerland based on data from a sparse realtime network of raingauges and from a spatially complete radar composite. Two variants of Ordinary Kriging (OK) are used to interpolate the sparse gauge observations. In both OK variants, the radar data are only used to determine the semivariogram model. One variant relies on a traditional parametric semivariogram estimate, whereas the other variant uses the nonparametric correlogram. The variants are tested for three cases and the impact of the semivariogram model on the Kriging prediction is illustrated. For the three test cases, the method using nonparametric correlograms performs equally well or better than the traditional method, and at the same time offers great practical advantages. Furthermore, two variants of Kriging with external drift (KED) are tested, both of which use the radar data to estimate nonparametric correlograms, and as the external drift variable. The first KED variant has been used previously for geostatistical radar-raingauge merging in Catalonia (Spain). The second variant is newly proposed here and is an extension of the first. Both variants are evaluated for the three test cases as well as an extended evaluation period. It is found that both methods yield merged fields of better quality than the original radar field or fields obtained by OK of gauge data. The newly suggested KED formulation is shown to be beneficial, in particular in mountainous regions where the quality of the Swiss radar composite is comparatively low. An analysis of the Kriging variances shows that none of the methods tested here provides a satisfactory uncertainty estimate. A suitable variable transformation is expected to improve this.
CitationSchiemann, R. [et al.]. Geostatistical radar-raingauge combination with nonparametric correlograms: methodological considerations and application in Switzerland. "Hydrology and Earth System Sciences", 19 Maig 2011, vol. 15, p. 1515-1536.
URIhttp://hdl.handle.net/2117/13416
DOI10.5194/hess-15-1515-2011
ISSN1027-5606
Publisher versionhttp://www.hydrol-earth-syst-sci.net/15/1515/2011/hess-15-1515-2011.html