Important parameters in plasma jets for the production of RONS in liquids for plasma medicine: A brief review 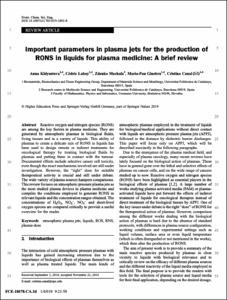 CovenanteeUniverzita Komenského v Bratislave; Univerzita Komenského v Bratislave
Document typeArticle
Rights accessOpen Access
European Commission's projectAPACHE - Atmospheric Pressure plAsma meets biomaterials for bone Cancer HEaling (EC-H2020-714793)
Abstract
Reactive oxygen and nitrogen species (RONS) are among the key factors in plasma medicine. They are generated by atmospheric plasmas in biological fluids, living tissues and in a variety of liquids. This ability of plasmas to create a delicate mix of RONS in liquids has been used to design remote or indirect treatments for oncological therapy by treating biological fluids by plasmas and putting them in contact with the tumour. Documented effects include selective cancer cell toxicity, even though the exact mechanisms involved are still under investigation. However, the “right” dose for suitable therapeutical activity is crucial and still under debate. The wide variety of plasma sources hampers comparisons. This review focuses on atmospheric pressure plasma jets as the most studied plasma devices in plasma medicine and compiles the conditions employed to generate RONS in relevant liquids and the concentration ranges obtained. The concentrations of H2O2, NO2-, NO3- and short-lived oxygen species are compared critically to provide a useful overview for the reader
CitationKhlyustova, A. [et al.]. Important parameters in plasma jets for the production of RONS in liquids for plasma medicine: A brief review. "Frontiers of Chemical Science and Engineering", Juny 2019, vol. 13, núm. 2, p. 238-252.
URIhttp://hdl.handle.net/2117/134098
DOI10.1007/s11705-019-1801-8
ISSN2095-0179
Publisher versionhttps://link.springer.com/article/10.1007%2Fs11705-019-1801-8
Collections
Share: