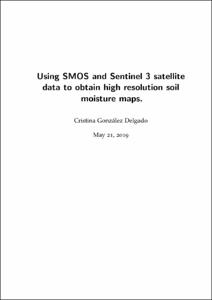 Surface soil moisture is a critical climate variable and strongly influences water and energy cycles at the surface-atmosphere interface. It is widely used to improve numerical climate and weather models, rainfall and drough estimation, vegetation monitoring, among others. Traditionally, there were two main ways to retrieve soil moisture data. On one hand, soil moisture sensors networks placed and maintained in situ to obtain long term distributed measurements, which is expensive and time-consuming. On the other hand, soil moisture data could be obtained by using numerical model products combined with ground observations. But, in both cases, the data resolution provided was not enough to characterize soil moisture at large scale. Nowadays, microwave remote sensing allows the global monitoring of soil moisture. SMOS (Soil Moisture and Ocean Salinity) mission, launched in 2009, was the first mission with this objective and providing an acceptable spatial resolution. It aims to monitor soil moisture over land surfaces, surface salinity over the oceans, and surfaces covered by snow and ice, by performing microwave radiometric measurements at L-band, characterized by being unaffected by cloud cover and variable surface solar illumination. The SMOS soil moisture data has a spatial resolution of 35-50 km, which is enough for global applications. But, local applications such as hydrological, fire prevention, agricultural and water management, require higher soil moisture resolution. In order to cover this necessity, several downscaling methodologies have been developed to improve the spatial resolution. The Department of Signal Theory in the UPC developed a downscaling algorithm based on the synergistic usage of low resolution soil moisture map and data provided by other satellites, that computed soil moisture maps at 1 km resolution (Maria Piles, 2010 [32]). This algorithm combines the SMOS soil moisture with NDVI and LST measurements from Aqua and Terra missions obtained by MODIS instrument. Later, this algorithm was improved by using an adaptive sliding window, which is the version we will use in this project (Gerard Portal, 2017 [24]). The aim of this project is to substitute the NDVI and LST measurements from MODIS used as ancillary data in the downscaling algorithm by the ones provided by Sentinel 3, comparing its differences and the variation of the high resolution soil moisture maps (SM HR maps) obtained. Also, it will include the evaluation of the data download and preparation process workflow.
SubjectsSatellites, Soil moisture, Satèl·lits, Sòls -- Humitat
URIhttp://hdl.handle.net/2117/134038