The sum of edge lengths in random linear arrangements 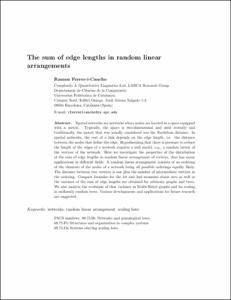 Document typeArticle
PublisherInstitute of Physics (IOP)
Rights accessOpen Access
Abstract
Spatial networks are networks where nodes are located in a space equipped with a metric. Typically, the space is two-dimensional and until recently and traditionally, the metric that was usually considered was the Euclidean distance. In spatial networks, the cost of a link depends on the edge length, i.e. the distance between the nodes that define the edge. Hypothesizing that there is pressure to reduce the length of the edges of a network requires a null model, e.g. a random layout of the vertices of the network. Here we investigate the properties of the distribution of the sum of edge lengths in random linear arrangement of vertices, that has many applications in different fields. A random linear arrangement consists of an ordering of the elements of the nodes of a network being all possible orderings equally likely. The distance between two vertices is one plus the number of intermediate vertices in the ordering. Compact formulae for the 1st and 2nd moments about zero as well as the variance of the sum of edge lengths are obtained for arbitrary graphs and trees. We also analyze the evolution of that variance in Erdos–Rényi graphs and its scaling in uniformly random trees. Various developments and applications for future research are suggested.
CitationFerrer-i-Cancho, R. The sum of edge lengths in random linear arrangements. "Journal of statistical mechanics: Theory and experiment", Maig 2019, vol. 2019, núm. 5, article 053401.
URIhttp://hdl.handle.net/2117/134020
DOI10.1088/1742-5468/ab11e2
ISSN1742-5468
Publisher versionhttps://iopscience.iop.org/article/10.1088/1742-5468/ab11e2/meta
Other identifiershttps://arxiv.org/abs/1905.03654
Collections
Share: