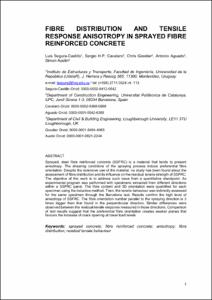 Austin, Simon
Document typeArticle
Rights accessOpen Access
Abstract
Sprayed steel fibre reinforced concrete (SSFRC) is a material that tends to present anisotropy, due to the action of the spraying process inducing preferential fibre orientation. Despite numerous applications worldwide since the 1980s, no study has been found of the assessment of fibre distribution and its influence on the residual tensile strength of SSFRC. This work addresess this issue from a quantitative standpoint through an experimental programme with specimens extracted in various orientations within a SSFRC panel. The fibre content and 3D orientation were quantified using the inductive method and correlated with an indirect tensile behaviour for the same specimen with the Barcelona test. The results confirm the high level of anisotropy of SSFRC. The fibre orientation number parallel to the spraying direction is three times bigger than that found in the perpendicular direction. Similar differences were observed between the residual tensile response measured in those directions. Comparison of test results suggest that the preferential fibre orientation creates weaker planes that favours the increase of crack opening at lower load levels.
Description
The final publication is available at Springer via http://dx.doi.org/10.1617/s11527-018-1156-5
CitationSegura Castillo, L. [et al.]. Fibre distribution and tensile response anisotropy in sprayed fibre reinforced concrete. "Materials and structures", Febrer 2018, vol. 51, núm. 1, p. 1-12.
URIhttp://hdl.handle.net/2117/134015
DOI10.1617/s11527-018-1156-5
ISSN1359-5997
Publisher versionhttps://link.springer.com/article/10.1617/s11527-018-1156-5
Other identifiershttps://www.researchgate.net/publication/322867806_Fibre_distribution_and_tensile_response_anisotropy_in_sprayed_fibre_reinforced_concrete
Collections
Share: