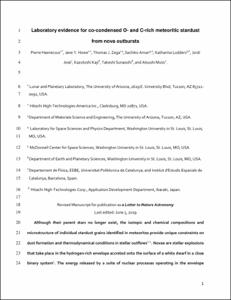 Kaji, Kazutoshi
Sunaoshi, Takeshi
Atsushi, Muto
Document typeArticle
PublisherSpringer Nature
Rights accessOpen Access
Abstract
Although their parent stars no longer exist, the isotopic and chemical compositions and microstructure of individual stardust grains identified in meteorites provide unique constraints on dust formation and thermodynamic conditions in stellar outflows1,2,3,4,5. Novae are stellar explosions that take place in the hydrogen-rich envelope accreted onto the surface of a white dwarf in a close binary system6. The energy released by a suite of nuclear processes operating in the envelope powers a thermonuclear runaway, resulting in the ejection of processed material into the interstellar medium. Spectral fitting of features observed in the infrared spectra of dust-forming novae provided evidence of the co-condensation of both carbonaceous and silicate dust in stellar outflows within 50 to 100 days after explosion7,8,9. Although novae appear as prolific producers of both carbon- and oxygen-rich dust, very few presolar grains that can be attributed to novae have been found in meteorites thus far10,11,12,13,14,15,16. Here, we report the identification of an oxygen-rich inclusion, composed of both silicate and oxide nanoparticles, inside a graphite spherule that originated in the ejecta of a low-mass carbon- and oxygen-rich (CO) nova. This observation establishes laboratory evidence of the co-condensation of oxygen- and carbon-rich dust in nova outbursts and is consistent with large-scale transport and mixing of materials between chemically distinct clumps in the nova ejecta.
CitationHaenecour, P. [et al.]. Laboratory evidence for co-condensed oxygen- and carbon-rich meteoritic stardust from nova outbursts. "Nature Astronomy", 29 April 2019, No 3, pp. 626-630
URIhttp://hdl.handle.net/2117/134009
DOI10.1038/s41550-019-0757-4
ISSN2397-3366
Publisher versionhttps://www.nature.com/articles/s41550-019-0757-4
Collections
Share: