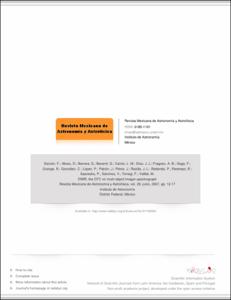 EMIR, currently entering into its fabrication and AIV phase, will be one of the first common user instruments for the GTC, the 10 meter telescope under construction by GRANTECAN at the Roque de los Muchachos Observatory (Canary Islands, Spain). EMIR is being built by a Consortium of Spanish and French institutes led by the Instituto de Astrofísica de Canarias (IAC). EMIR is designed to realize one of the central goals of 10m class telescopes, allowing observers to obtain spectra for large numbers of faint sources in a time-efficient manner. EMIR is primarily designed to be operated as a MOS in the K band, but others a wide range of observing modes, including imaging and spectroscopy, both long slit and multi-object, in the wavelength range 0.9 to 2.5 um. It is equipped with two innovative subsystems: a robotic reconfigurable multi-slit mask and dispersive elements formed by the combination of high quality distraction grating and conventional prisms, both at the heart of the instrument. The present status of development, expected performances, schedule and plans for scientific exploitation are described and discussed. The development and fabrication of EMIR is funded by GRANTECAN and the Plan Nacional de Astronomía y Astrofísica (National Plan for Astronomy and Astrophysics, Spain).