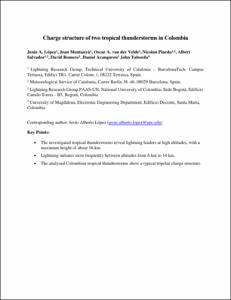 Aranguren Fino, Harby Daniel
Taborda, John
Document typeArticle
Rights accessOpen Access
Abstract
Charge structure derived from lightning leader development of tropical thunderstorms comprising equatorial latitudes of < ±10° has not been investigated yet. In this work, using a Lightning Mapping Array (LMA) installed in northern Colombia, the charge structure, lightning leader initiations and the cloud-to-ground strokes rates of two thunderstorms have been analyzed. Additionally, radar information is also included. The identification of the charge regions has been obtained by analyzing the propagation of lightning leader developments. Flashes initiate between 4 and 15 km altitude. High initiation rates are different in the two storms. In one case the high rates are found between 8 and 13 km. In the other these are found between 10 and 15 km. The storms show typical tripolar structure where the upper positive charge is present at 10 to ~15 km, the mid-level negative charge is found between 6 and 9 km and the lower positive charge between 4 and 6 km altitude. Intracloud lightning flashes with inverted polarity have been identified for short period. In other periods, screening layer flashes have been detected at 14-15 km. The overall results show that the charge structures in the two Colombian storms are similar to the ones reported in North-Central Florida, but with a significant difference being the more than 2 km higher initiation altitude in Colombia. The vertical configuration of the charge regions and the leader development of these thunderstorms might help to explain the occurrence of Terrestrial Gamma-ray Flashes in tropical thunderstorms
Location
1: San Benito Abad, Departament de Sucre, Colòmbia
CitationLopez, J. [et al.]. Charge structure of two tropical thunderstorms in Colombia. "Journal of geophysical research: atmospheres", Vol. 124, No 10, pp. 5503-5515
URIhttp://hdl.handle.net/2117/133962
DOI10.1029/2018JD029188
ISSN2169-8996
Publisher versionhttps://agupubs.onlinelibrary.wiley.com/doi/10.1029/2018JD029188
Collections
Share: