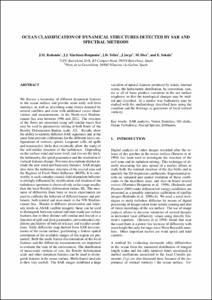 Díez Rilova, Margarita
Sekula, Emil
Document typeConference report
PublisherEuropean Space Agency (ESA)
Rights accessOpen Access
Abstract
We discuss a taxonomy of different dynamical featuresin the ocean surface and provide some eddy and frontstatistics, as well as describing some events detected byseveral satellites and even with additional cruise observationsand measurements, in the North-west MediterraneanSea area between 1996 and 2012. The structureof the flows are presented using self-similar traces thatmay be used to parametrize mixing at both limits of the Ross by Deformation Radius scale, RL. Results showthe ability to identify different SAR signatures and at thesame time provide calibrations for the different local configurationsof vortices, spirals, Langmuir cells, oil spillsand tensioactive slicks that eventually allow the study ofthe self-similar structure of the turbulence. Dependingon the surface wind and wave level, and also on the fetch.the bathimetry, the spiral parameters and the resolution of vortical features change. Previous descriptions did not includethe new wind and buoyancy features. SAR imagesalso show the turbulence structure of the coastal area andthe Regions of Fresh Water Influence (ROFI). It is not eworthytt such complex coastal fielddependent behavioris strongly influenced by stratification and rotation of theturbulence spectrum is observed only in the range smallerthan the local Ross by deformation radius, RL. The measuresof diffusivity from buoy or tracer experiments areused to calibrate the behavior of different tracers and pollutants,both natural and man-made in the NW MediterraneanSea. Thanks to different polarization and intensitylevels in ASAR satellite imagery, these can be usedto distinguish between natural and man-made sea surfacefeatures due to their distinct self-similar and fractal as afunction of spill and slick parameters, environmental conditionsand history of both oil releases and weather conditions.Eddy diffusivity map derived from SAR measurementsof the ocean surface, performing a feature spatialcorrelation of the available images of the region are presented.Both the multi fractal discrimination of the localfeatures and the diffusivity measurements are importantto evaluate the state of the environment. The distributionof meso-scale vortices of size, the Ross by de for mationscale and other dominant features can be used to distinguishfeatures in the ocean surface. Multi-fractal analysisis then very use full. The SAR images exhibited a largevariation of natural features produced by winds, internalwaves, the bathymetric distribution, by convection, rain,etc as all of these produce variations in the sea surfaceroughness so that the topological changes may be studiedand classified. In a similar way bathimetry may bestudied with the methodology described here using thecoastline and the thal wegs as generators of local verticalvorticity.
CitationRedondo, J. M. [et al.]. Ocean classification of dynamical structures detected by SAR and spectral methods. A: European Space Agency Living Planet Symposium. "Proceedings of Living Planet Symposium 2016: 9-13 May 2016: Prague, Czech Republic". Paris: European Space Agency (ESA), 2016, p. 1-6.
URIhttp://hdl.handle.net/2117/133960
ISBN978-92-9221-305-3
Collections
Share: