Found/Lost in Translation : Translating Procedures as Conceptual Tools for the Project of Architecture 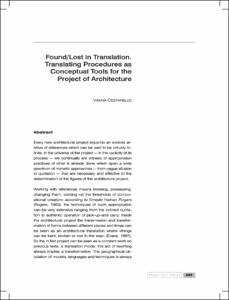 Show full item record
Cestarello, Vanna
Document typeArticle
PublisherUniversitat Politècnica de Catalunya. Iniciativa Digital Politècnica
Rights accessOpen Access
Abstract
Every new architectural project expands an evolves archive of references which can be said to be virtually infinite. In the universe of the project — in the cyclicity of its process — we continually are witness of appropriation practices of what is already done which open a wide spectrum of mimetic approaches — from vague allusion to quotation — that are necessary and effective to the determination of the figures of the architecture project. Working with references means knowing, possessing, changing them, coming «at the thresholds of compositional creation» according to Ernesto Nathan Rogers (Rogers, 1963); the techniques of such appropriation can be very extensive ranging from the indirect quotation to authentic operation of pick-up-and carry: inside the architectural project the transmission and transformation of forms between different places and times can be seen as an architectural translation where «things can be bent, broken or lost in the way» (Evans, 1997). So the in fieri project can be seen as a constant work on previous texts, a translation mode: this act of rewriting always implies a transformation. The geographical circulation of models, languages and techniques is always a process of translation that directly involves the architecture and is reflected into the project from the most elusive interactions to true cultural transfer, or rather the set of relations that comes to establish between different geocultural areas and that allow to outline the on-going changes. If you assume that each architectural project is a derivative of a text deemed original, from translations of translations have led to a formal sequence where gradually changed repetitions specifies their traits over time, it is possible to read some of the sub translative species. Adaptation, calque, compensation, loan and so on (Vinay and Darbelnet, 1958), procedures borrowed from well-established translating practices could become, for an architect, ways of establishing distance relationships with analogous elements and links between distant episodes in space (and inevitably over time) to celebrate the transversal complex relations that characterize the built environment. The aim is to investigate the ways to decline the role of reference in the design project processes assimilating as hypothesis of research the affinity of the compositional to the translational process not in the reading/drafting/review structure typical of the translator, but as a «grammar of options» among different translation procedures (calque, borrowing, transposition, modulation etc.) as tools to understand also the architectural translation, far from quotation, copy-paste mechanisms and so on. The interest does not lie in the object studied, but rather in the activity that produces it. Every building, like every literary text with its translations «speaks to us not only of himself, but of all the others he represents a transformation and helps us to understand those aspects that, considered in isolation, are not showed». (Martì Aris, 2006)
CitationCestarello, V. Found/Lost in Translation : Translating Procedures as Conceptual Tools for the Project of Architecture. "Arquitectonics: Mind, Land & Society", Maig 2019, núm. 31, p. 225-240.
URIhttp://hdl.handle.net/2117/133924
ISSN1579-4431
Collections
Share: