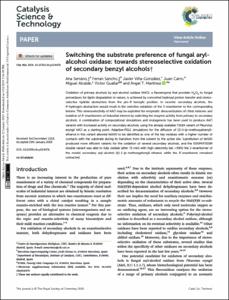 Abstract
Oxidation of primary alcohols by aryl-alcohol oxidase (AAO), a flavoenzyme that provides H2O2 to fungal peroxidases for lignin degradation in nature, is achieved by concerted hydroxyl proton transfer and stereoselective hydride abstraction from the pro-R benzylic position. In racemic secondary alcohols, the R-hydrogen abstraction would result in the selective oxidation of the S-enantiomer to the corresponding ketone. This stereoselectivity of AAO may be exploited for enzymatic deracemization of chiral mixtures and isolation of R-enantiomers of industrial interest by switching the enzyme activity from primary to secondary alcohols. A combination of computational simulations and mutagenesis has been used to produce AAO variants with increased activity on secondary alcohols, using the already available F501A variant of Pleurotus eryngii AAO as a starting point. Adaptive-PELE simulations for the diffusion of (S)-1-(p-methoxyphenyl)-ethanol in this variant allowed Ile500 to be identified as one of the key residues with a higher number of contacts with the substrate during its transition from the solvent to the active site. Substitution of Ile500 produced more efficient variants for the oxidation of several secondary alcohols, and the I500M/F501W double variant was able to fully oxidize (after 75 min) with high selectivity (ee >99%) the S-enantiomer of the model secondary aryl-alcohol (±)-1-(p-methoxyphenyl)-ethanol, while the R-enantiomer remained unreacted.
CitationSerrano, A. [et al.]. Switching the substrate preference of fungal aryl-alcohol oxidase: towards stereoselective oxidation of secondary benzyl alcohols. "Catalysis Science and Technology", 22 Gener 2019, vol. 9, núm. 3, p. 833-841.
Award-winningAward-winning
URIhttp://hdl.handle.net/2117/133896
DOI10.1039/C8CY02447B
ISSN2044-4753
Publisher versionhttps://pubs.rsc.org/en/content/articlelanding/2019/cy/c8cy02447b#!divAbstract
Collections
Share: