Electric power generation from the hybrid turbocharger of a marine propulsion diesel engine. 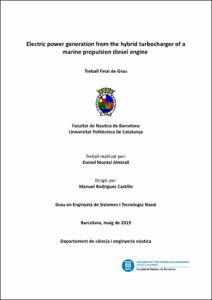 Document typeBachelor thesis
Rights accessOpen Access
Description
This thesis analyses the concept of using a hybrid turbocharger as an energy recovery system to generate electric power from the exhaust gases of a marine propulsion Diesel engine. The study has been based in the use of a previously tested numerical model developed in Matlab® and Simulink® software to perform a series of simulations of a MAN V12 51/60 DF turbocharged engine, which originally does not count with this electricity generation technology. For this reason, the study has been notably focused on the effects of this design on the turbocharger, especially on its compressor, but considerable attention also has been paid to the engine fuel-air mixture characteristics and fuel consumption behavior.
SubjectsShip propulsion, Diesel motor, Marine engines, Vaixells -- Propulsió, Motors dièsel, Motors navals
DegreeGRAU EN ENGINYERIA EN SISTEMES I TECNOLOGIA NAVAL (Pla 2010)
URIhttp://hdl.handle.net/2117/133865
Collections
Share: