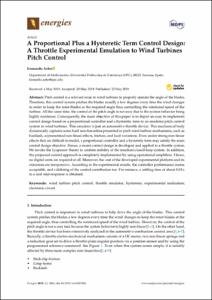 Except where otherwise noted, content on this work is licensed under a Creative Commons license : Attribution 4.0 International
ProjectDISEÑO DE ESTRATEGIAS AVANZADAS DE CONTROL Y DETECCION DE FALLOS PARA SISTEMAS MECATRONICOS COMPLEJOS (MINECO-DPI2015-64170-R)
Abstract
Pitch control is a relevant issue in wind turbines to properly operate the angle of the blades. Therefore, this control system pitches the blades usually a few degrees every time the wind changes in order to keep the rotor blades at the required angle thus controlling the rotational speed of the turbine. All the same time, the control of the pitch angle is not easy due to the system behavior being highly nonlinear. Consequently, the main objective of this paper is to depict an easy to implement control design based on a proportional controller and a hysteretic term to an emulator pitch control system in wind turbines. This emulator is just an automotive throttle device. This mechanical body dynamically captures some hard non-linearities presented in pitch wind turbine mechanisms, such as backlash, asymmetrical non-lineal effects, friction, and load variations. Even under strong non-linear effects that are difficult to model, a proportional controller and a hysteretic term may satisfy the main control design objective. Hence, a recent control design is developed and applied to a throttle system. We invoke the Lyapunov theory to confirm stability of the resultant closed-loop system. In addition, the proposed control approach is completely implemented by using operational amplifiers. Hence, no digital units are required at all. Moreover, the cost of the developed experimental platform and its outcomes are inexpensive. According to the experimental results, the controller performance seems acceptable, and validating of the control contribution too. For instance, a settling-time of about 0.03 s to a unit step-response is obtained.
CitationAcho, L. A proportional plus a hysteretic term control design: a throttle experimental emulation to wind turbines pitch control. "Energies", 22 Maig 2019, vol. 12, núm. 10, p. 1-14.
URIhttp://hdl.handle.net/2117/133777
DOI10.3390/en12101961
ISSN1996-1073
Publisher versionhttps://www.mdpi.com/1996-1073/12/10/1961
Collections
Share: