Study of the background in the measuring station at the n_TOF facility at CERN: sources and solutions 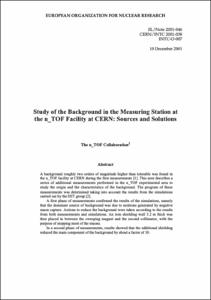 Study of the background in the measuring station at the n_TOF facility at CERN: sources and solutions (1,247Mb)
Share:

Document typeExternal research report
Rights accessOpen Access
Abstract
A background roughly two orders of magnitude higher than tolerable was found in the n_TOF facility at CERN during the first measurements. This note describes a series of additional measurements performed in the n_TOF experimental area to study the origin and the characteristics of the background. The program of these measurements was determined taking into account the results from the simulations carried out by the EET group. A first phase of measurements confirmed the results of the simulations, namely that the dominant source of background was due to neutrons generated by negative muon capture. Actions to reduce the background were taken according to the results from both measurements and simulations. An iron shielding wall 3.2 m thick was then placed in between the sweeping magnet and the second collimator, with the purpose of stopping most of the muons. In a second phase of measurements, results showed that the additional shielding reduced the main component of the background by about a factor of 30.
CitationAbbondanno, U. [et al.]. "Study of the background in the measuring station at the n_TOF facility at CERN: sources and solutions". 2001.
URIhttp://hdl.handle.net/2117/133767
URL other repositoryhttp://cds.cern.ch/record/529405?ln=ca
Collections
Share: