(n,cp) reactions study at the n_TOF facilitty at CERN: results for the cosmological lithium problem 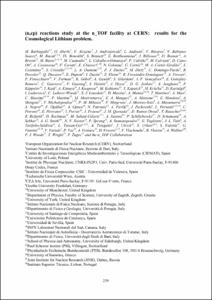 Document typeConference lecture
PublisherEuropean Organization for Nuclear Research (CERN)
Rights accessOpen Access
Abstract
The Big Bang Nucleosynthesis describes the production of the lightest nuclides from deuterium to Li at the early stages of the Universe. While a general good agreement is found for most of the isotopes involved in the synthesis, a serious discrepancy between the predicted abundance of 7Li and the related experimental observations is still present. This discrepancy has been referred since several decades as Cosmological Lithium Problem. In one last attempt to find nuclear solutions to this longstanding conundrum, the 7Be(n,alpha)4He and 7Be(n,p)7Li reactions, that affect predominantly the production of 7Li via the destruction of his parent nucleus 7Be, have been studied. Here we present the 7Be(n,a)4He and 7Be(n,p)7Li reaction crosssection measurements performed at the high-resolution n_TOF facility using the time-of-flight technique and high purity samples. The result of the experiments definitely rules out neutron induced reactions as a solution to the puzzle, thus indicating that explanations have to be sought out in other Physics scenarios.
CitationBarbagallo, M. [et al.]. (n,cp) reactions study at the n_TOF facilitty at CERN: results for the cosmological lithium problem. A: International Conference on Nuclear Reaction Mechanisms. "Proceedings of the 15th International Conference on Nuclear Reaction Mechanisms: Varenna, Italy: June 11-15, 2019". Meyrin: European Organization for Nuclear Research (CERN), 2019, p. 259-264.
URIhttp://hdl.handle.net/2117/133707
ISBN9789290835202
Other identifiershttps://cds.cern.ch/record/2669963?ln=ca
Collections
Share: