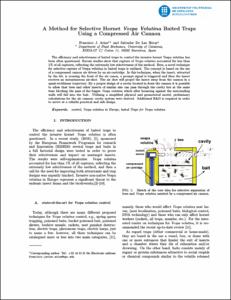 Document typeExternal research report
Rights accessOpen Access
Abstract
The efficiency and selectiveness of baited traps to control the invasive hornet Vespa velutina has been often questioned. Recent studies show that capture of Vespa velutina accounted for less than 1% of all captures, reflecting the extremely low selectiveness of the method. Here, a novel technique for selective capture of Vespa velutina in baited traps is outlined. The concept is based on the use of a compressed cannon air driven by an air-cartridge. In this technique, when the insect, attracted by the bit, is crossing the front of the air canon, a prompt signal is triggered and then the insect receives an instantaneous air-shot. The air shot will propel the insect away from the cannon in a quasi-rectilinear trajectory. By a proper design of a cavity located in front the cannon it is possible to allow that bees and other insects of similar size can pass through the cavity but at the same time blocking the pass of the bigger Vespa velutina which after bouncing against the surrounding walls will fall into the bait. Utilizing a simplified physical and geometrical model, preliminary calculations for the air cannon- cavity system were derived. Additional R&D is required in order to arrive at a reliable practical and safe design.
CitationArias, F.J.; De Las Heras, S.A. "A method for selective hornet Vespa Velutina baited traps using a compressed air cannon". 2019.
URIhttp://hdl.handle.net/2117/133642
Collections
Share: