The vierendeel truss: past and present of an innovative typology 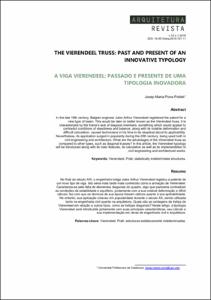 In the late 19th century, Belgian engineer Jules Arthur Vierendeel registered the patent for a new type of beam. This would be later on better known as the Vierendeel truss. It is characterized by the frame’s lack of diagonal members, something which would appear to contradict conditions of steadiness and balance, along with its notable deformation and difficult calculation, caused technicians in his time to be skeptical about its applicability. Nevertheless, its application surged in popularity during the 20th century, being used both in civil engineering and architecture. What are the advantages of the Vierendeel truss as compared to other types, such as diagonal trusses? In this article, the Vierendeel typology will be introduced along with its main features, its calculation as well as its implementation in civil engineering and architectural works.
CitationPons, J.Mª. The vierendeel truss: past and present of an innovative typology. "Arquitetura revista", 20 Maig 2019, vol. 15, núm. 1, p. 193-211.
URIhttp://hdl.handle.net/2117/133636
DOI10.4013/arq.2019.151.11
ISSN1808-5741
Publisher versionhttp://revistas.unisinos.br/index.php/arquitetura/index