Non-invasive decoding of the motoneurons: A guided source separation method based on convolution kernel compensation with clustered initial points 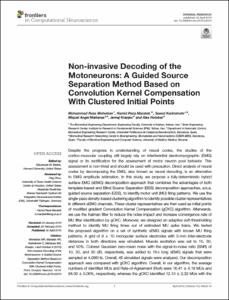 Despite the progress in understanding of neural codes, the studies of the cortico-muscular coupling still largely rely on interferential electromyographic (EMG) signal or its rectification for the assessment of motor neuron pool behavior. This assessment is non-trivial and should be used with precaution. Direct analysis of neural codes by decomposing the EMG, also known as neural decoding, is an alternative to EMG amplitude estimation. In this study, we propose a fully-deterministic hybrid surface EMG (sEMG) decomposition approach that combines the advantages of both template-based and Blind Source Separation (BSS) decomposition approaches, a.k.a. guided source separation (GSS), to identify motor unit (MU) firing patterns. We use the single-pass density-based clustering algorithm to identify possible cluster representatives in different sEMG channels. These cluster representatives are then used as initial points of modified gradient Convolution Kernel Compensation (gCKC) algorithm. Afterwards, we use the Kalman filter to reduce the noise impact and increase convergence rate of MU filter identification by gCKC. Moreover, we designed an adaptive soft-thresholding method to identify MU firing times out of estimated MU spike trains. We tested the proposed algorithm on a set of synthetic sEMG signals with known MU firing patterns. A grid of 9 × 10 monopolar surface electrodes with 5-mm inter-electrode distances in both directions was simulated. Muscle excitation was set to 10, 30, and 50%. Colored Gaussian zero-mean noise with the signal-to-noise ratio (SNR) of 10, 20, and 30 dB, respectively, was added to 16 s long sEMG signals that were sampled at 4,096 Hz. Overall, 45 simulated signals were analyzed. Our decomposition approach was compared with gCKC algorithm. Overall, in our algorithm, the average numbers of identified MUs and Rate-of-Agreement (RoA) were 16.41 ± 4.18 MUs and 84.00 ± 0.06%, respectively, whereas the gCKC identified 12.10 ± 2.32 MUs with the average RoA of 90.78 ± 0.08%. Therefore, the proposed GSS method identified more MUs than the gCKC, with comparable performance. Its performance was dependent on the signal quality but not the signal complexity at different force levels. The proposed algorithm is a promising new offline tool in clinical neurophysiology
CitationMohebian, M. [et al.]. Non-invasive decoding of the motoneurons: A guided source separation method based on convolution kernel compensation with clustered initial points. "Frontiers in computational neuroscience", 1 Abril 2019, vol. 13, p. 14-1-14-14.
URIhttp://hdl.handle.net/2117/133614
DOI10.3389/fncom.2019.00014
ISSN1662-5188
Publisher versionhttps://www.frontiersin.org/articles/10.3389/fncom.2019.00014/full